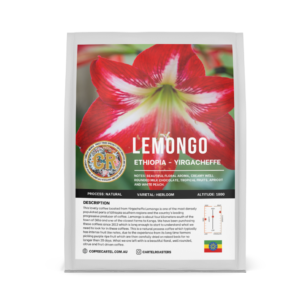 This lovely coffee located from Yirgacheffe Lemongo is one of the most densely populated parts of Ethiopia southern regions and the country’s leading progressive producer of coffee. Lemongo is about four kilometers south of the town of Dilla and one of the closest farms to Konga. We have been purchasing these coffees 2013 which is long enough to start to understand what we need to look for in these coffees. First it’s a natural process coffee which typically what  normally has an intense fruit like note, due to the experience from its long time farmers picking ripe fruit carefully dried on raised beds for no longer than 20 days. What we have is a super clean yet vibrant cup of love. Yirgacheffe produces stunning coffees that are so unique that we can easily pick up the flavour profile what tasting. Every year we always look forward to sharing these coffees with you and especially the roasters release editions.

I only drink black coffee so will be commenting from that standpoint. Another standout from Cartel. A lot of beauty in this bean. Floral notes are stand out, fruits and peach too. Chocolate note more subtle on my tastebuds, but it’s def very well-rounded. I’ve have also had this as a cold-drip and it’s perfect for warm summers. Really vibrant and joyful cup, this one.

This is now my favourite coffee. I particularly like the citrus flavours you get from some high altitude grown coffees and this one has it. Smooth and fruity!! Highly recommend!!

The Lemongo is a very smooth satisfying coffee. It is consistently good.