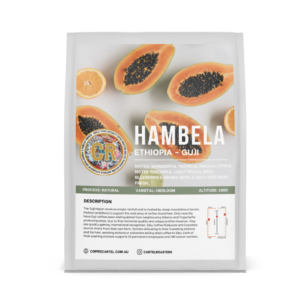 The Guji region receives ample rainfall and is marked by steep mountainous terrain. Perfect conditions to support the vast array of coffee found here. Only recently have Guji coffees been distinguished from neighbouring Sidamo and Yirgacheffe producing areas. Due to their immense quality and unique profiles however, they are quickly gaining international recognition. Sibu Coffee Producers and Exporters source cherry from their own farm, farmers delivering to their 3 washing stations and farmers, washing stations or collectors selling dried coffee to Sibu. Each of their washing stations supports 20 permanent employees and 180 season workers.

While Ethiopia is famous as coffee’s birthplace, today it remains a specialty coffee industry darling for its incredible variety of flavors. While full traceability has been difficult in recent history, new regulations have made direct purchasing possible. We’re partnering directly with farmers to help them produce top quality specialty lots that are now completely traceable, adding value for farmers and roasters, alike.

The exceptional quality of Ethiopian coffee is due to a combination of factors. The genetic diversity of coffee varieties means that we find a diversity of flavor, even between (or within) farms with similar growing conditions and processing. In addition to varieties, processing methods also contribute to end quality. The final key ingredients for excellent coffee in Ethiopia are the producing traditions that have created the genetic diversity, processing infrastructure and great coffee we enjoy today.

Most producers in Ethiopia are smallholders, and the majority continue to cultivate coffee using traditional methods. As a result, most coffee is grown with no chemical fertilizer or pesticide use. Coffee is almost entirely cultivated, harvested and dried using manual systems

Good flavoured coffee. There was a stone in the bag though – glad I spotted that and it didn’t go through my grinder.

You can really sense the fruity aromas – predominantly the stone fruits for me. I couldn’t sense a coconut finish as such, but it’s a great coffee if you like a fruity fragrance. I was using it for my cold drip and it hit the spot for the warmer days. Really nice

D
Daz
Was too bitter

I get that it is a single origin, but it had no flavour at all. The blend you sold me was amazing though. Glee coffee sell a bean like this one that tastes amazing both with or without milk.

J
James Thompson
Not a fan

Coffee cartel have been great to deal with, but the coffee didn’t blow my socks off!