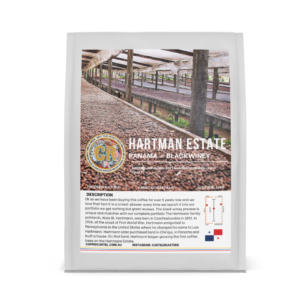 Ok so we have been buying this coffee for over 5 years now and we love that fact it is a crowd-pleaser every time we launch it into our portfolio The black winey process is unique and matches with our complete portfolio The Hartmann family patriarch, Alois St. Hartmann, was born in Czechoslovakia in 1891. In 1914, at the onset of First World War, Hartmann emigrated to Pennsylvania in the United States where he changed his name to Luis Hartmann. Hartmann later purchased land in Chiriqui, in Panama and built a house. On that land, Hartmann began growing the first coffee trees on the Hartmann Estate.

Direct descendants of Luis Hartmann own and manage the estate today. Third generation, Ratibor Hartmann manages the business and each of his four siblings oversees a specific aspect of the farm. There is a warm family vibe at this estate and issues are resolved smoothly in a way that you can tell that this family has lived together all their lives.

After harvest, cherry is pulped. Coffee and mucilage is moved to raised drying beds. For black honey, as much of the mucilage is left on the coffee as much as possible this is to give it as much almost natural process profile . Raised beds allow for greater airflow during drying and reduce the risk of fermenting or spoiling. Coffee is usually not turned during the first 24 hours of drying but then raked regularly afterwards. On average, drying takes between 1 and 3 weeks.

For the Black Winey process, cherry is picked when the cherry is darker and riper than is typically picked. Cherry is African raised beds. Cherry is visually inspected to remove damaged or over- and under-ripes and then laid in thin layers on raised beds. Raised beds allow for better airflow throughout drying that help prevent over-ripening, fermenting or spoiling.

Though small in coffee production, Panama is a mighty player in coffee quality. In particular, Panama is famous for producing Geisha variety of lots that have fetched prices exceeding $800 per pound. Today, its renown as a producer of rare and sought-after varieties positions Panama as a contender for a new kind of ‘coffee-tourism’ that has the potential to change the way we produce, purchase, consume and talk about specialty coffee on a global scale.

The high value of Geisha has brought out both the best and worst in the industry. For established producers who receive excellent prices for their Geisha and other lots, the high prices they receive have often been reinvested in their communities and in renovating their farms to be as environmentally sustainable as possible. Unfortunately, the lure of Geisha’s high value has led some people bypass traditional land purchasing agreements and illegally deforest areas of national parks to get the best location for new (and illicit) Geisha farms.

Even as the number of producers those receiving high prices for their Geisha remains relatively low, the blossoming coffee industry in Panama has demonstrated potential to raise incomes for a wider spectrum of producers and coffee workers.

We love buying this coffee and when it lands its absolutely excites our team to roast in several different ways in order to bring out some incredible new flavours, This coffee is exceptional as a filter and really shows you the true quality of the cup but it also has a beautiful unique flavour profile as a milk based coffee.

Too bitter and acidic for my palate