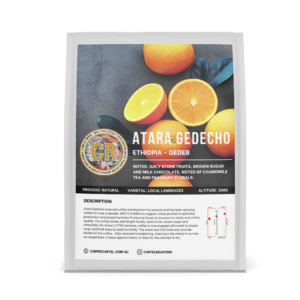 Atara Gedecho learned coffee farming from his parents and has been growing coffee for over a decade. With 5 children to support, Atara pivoted to specialty production and joined Gummiso Producing Group to increase his yields and coffee quality. His coffee shines with bright florals, stone fruits, brown sugar and chocolate.

This is a more rounded smooth tasting coffee compared to other Ethiopians I have tried. Less fruity but more chocolate. Good contrast to something like Lemongo. Ideally you’d have both available and have a nice choice!!

Very well balanced. Very subtle and smooth. Bright notes and stone fruit most prominent but not overpowering. Subtle brown sugar and white chocolate base. I love a big, punchy, fruity ethiopian, but this is definitely a soft and well-balanced coffee. Real crowd pleaser too.