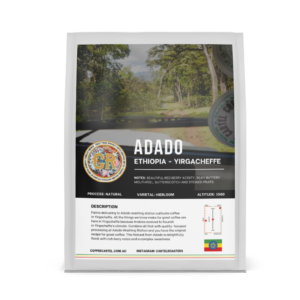 Adado is an area close to the town of Yirgacheffe in the Gedeo zone of Southern Ethiopia. It is named after the Adado tribe, and has some of the highest coffee growing coffee in the country, ranging between 2000 and 2350 masl. It is estimated that there are approximately 7000 producers in this area, who deliver cherry to 8 washing stations, which in turn produce between 20 and 30 containers of coffee for export each year.

Yirgacheﬀe is both a town and grade of coﬀee in Ethiopia. The town itself is located in the Gedeo zone in the Southern Nations and Nationalities Peoples Regional State (SNNPRS) in Southern Ethiopia. More than any other country, Ethiopia has a broad genetic diversity among its coﬀee varieties. Hierloom varietals are a wild and mysterious mixture of indigenous wildflower varieties, and each zone or village has its own flavour profile, shaped over many years according to growing conditions such as soil and elevation and climate. Processing in Yirgacheﬀe can take the form of both washed and natural. Much of the coﬀee production in Ethiopia is undertaken using traditional methods; under shade trees alongside other crops and without the use of chemicals. This region is often referred to as ‘garden coﬀee’ as it is grown on very small plots, often in the back yard of small dwellings.

Coffee in Ethiopia has been traded on the Ethiopia Commodity Exchange since 2008. The ECX was established to create an element of collective bargaining for farmers who are not members of cooperatives or owning large estates. Previously, only a third of all the agricultural products produced in Ethiopia reached the market due to the high costs and risks involved with trading. There was no assurance of product quality or quantity which meant buyers would only trade with suppliers they knew and trusted. This resulted in many of Ethiopia’s agricultural producers becoming isolated from the market, forcing them to sell their produce to the nearest buyer, sometimes a chain of multiple middlemen, and leaving them unable to negotiate on price or improve their market position.

With the introduction of the ECX, coffee exports in Ethiopia have become more regulated and centralized, enabling more smallholder producers to have access to the global market. Ninety per cent of all the coffee produced in Ethiopia now moves through the ECX where it is cupped and graded according to flavour profile and quality. Since its inception in 2008, the ECX claims to have introduced:

Really nice beans, great complexity of berries and acidity, great for espresso and long black!
Well worth getting again

The description of the bean provided on the packet is spot on. Not much else to add. It was a beautiful coffee with a fruity, fresh flavour. New favourite for sure

Have been getting this for about two years now and love the taste. Both with or without milk, the flavour is delicious. Also really happy with the postage – I live interstate and always receive my package about 2 days after I order. Great service!

Can’t go wrong with the range of Ethiopian coffee at Cartel but Adado stand out as my favourite one.