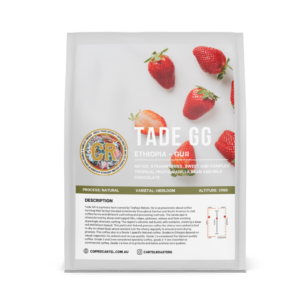 Tade GG is a private farm owned by Tesfaye Bekele. He is so passionate about coffee farming that he has traveled extensively throughout Central and South America to visit coffee farms and different cultivating and processing methods.

The landscape is characterized by sharp and rugged hills, ridges, plateaus, valleys and flats creating stunningly dramatic setting. The region’s volcanic soil bursts with nutrients, creating a deep red and brown topsoil. This particular Natural process coffee the cherry once picked is laid to dry on raised beds where workers turn the cherry regularly to ensure a even drying process. This coffee also is a Grade 1 specific Natural coffee. Grades in Ethiopia depend on visual inspection for defects and on cup quality. Grade 1 is considered the highest quality coffee. Grade 1 and 2 are considered specialty coffee, grade 3-9 are classified as commercial coffee. Grade 1 is free of cup faults and taints and has zero quakers.