The process is to ‘ferment’ the coffee in a fully sealed and oxygen deprived bag. First, the cherries are collected and separated from under ripe, over ripe and green cherries. Then, only the best fully ripe cherries are selected and tightly packed into special polypropylene bags.Oxygen is removed from the bags by sucking the air with vacuum machine. The bags are well sealed to prevent any oxygen re-entering. After around 18-24 hours, the anaerobic process will start and a build-up of CO2 gasses in the bag will occur. Typically, the cherries will be fermented for 4-5 days in the bags allowing the mucilage a long contact time with the coffee seed and the flavours of the sweet fruit to impart on the coffee. When the process is complete, the bright red cherry colour has charged to yellow tones. Once carefully removed from the tank, the coffee is dried slowly for 15-18 days on African drying beds in the full sun

Right from the start this is a nice smooth coffee. I can taste the plum and the caramel is definitely the taste I get all the way through to the end, and the after flavour, however it is not overwhelming, just a stand-out for me. It is still strong in body so milk would be nice, but I enjoy it black without a sweetener!

T
Tom B
Ethiopian single origin at its best

This is the coffee I’ve been missing for so long. I buy and try lots of different coffees from Cartel but this is on another level. Bursting with intricate levels of delicate flavour. Amazing as an espresso and stands up well to milk also. Don’t miss out, I’ll be ordering more!

This is one of my top three coffees of choice, period. Hard not to go back for seconds (or thirds), distinct toffee and plum with notes of blackberry from time to time. Highly recommend

By far one of the best (classic) Ethiopian single origin I’ve had over the last two years. Pack a punch with intense Berries notes. Absolutely phenomenal! 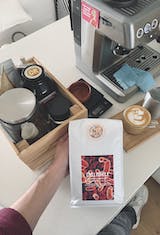