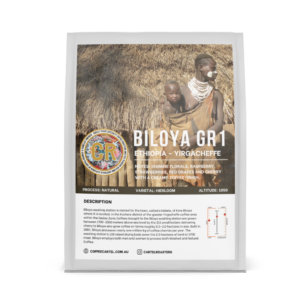 washing station is named for the town, called a kebele, of Kore Biloya where it is located, in the Kochere district of the greater Yirgacheffe coffee area within the Gedeo Zone.Coffees brought to the Biloya washing station are grown between 1700-2000 meters above sea level by the 211 smallholders delivering cherry to Biloya who grow coffee on farms roughly 0.5-2.0 hectares in size. Built in 2001, Biloya processes nearly one million kg of coffee cherries per year. The washing station’s 138 raised drying beds cover the 2.5 hectares of land at 1700 masl. Biloya employs both men and women to process both Washed and Natural Coffee.

Coffee cherries delivered to the washing station are first separated by hand to remove the less dense cherries. The remaining cherry is then taken to raised beds to dry in the sun, which takes about 21 days. Biloya’s employees turn the cherries by hand as the coffees dry. The mesh material allows for airflow both above and below the coffee to prevent the formation of any mildew or mold.

Natural processed coffee dried with cherry is then milled to remove the husks and stored in the dry mill warehouse. Beans are packaged in clearly marked 60kg bags for export.