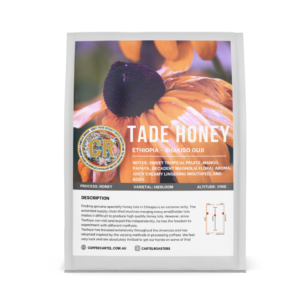 This coffee is grown in the Oromia region, one of Ethiopian’s largest specialty coffee growing producers. The farm is located in Shakisso (Guji Zone), which is in the Southern part of Oromia. Tade GG is a private farm, owned by a gentleman named Tesfaye Bekele.

Finding genuine specialty honey lots in Ethiopia is an extreme rarity. The extended supply chain that involves merging many smallholder lots makes it difficult to produce high quality Honey lots. However, since Tesfaye can mill and export his independently, he has the freedom to experiment with different methods.

Tesfeye has traveled extensively throughout the Americas and has returned inspired by the varying methods in processing coffees. We feel very luck and are absolutely thrilled to get our hands on some of this!

At the farm’s washing station cherry is typically pulped with an Agared machine (a pulper that has no mucilage remover).  Coffee and its mucilage dry on raised beds where workers turn it regularly to ensure even drying

The farm is 221 hectares in area and lies between 1,850 and 1,950 meters above sea level. The landscape is characterized by sharp and rugged hills, ridges, plateaus, valleys and flats, creating a stunningly dramatic setting for coffee production. The regions volcanic soil bursts with nutrients, creating a deep red and brown top layer of soil. Shakisso’s high altitude and dry weather allow for cherries to develop very slowly giving a much more sweeter, complex cup for you all to enjoy.

The coffee was really nice, tasted very much like firm peaches and plums, with a very nice floral flavour, very easy and enjoyable coffee to drink

Similar to the Hafursa (which has been a favourite for two years now).
My word! I honestly could smell the fruity hints just as I opened the bag. I received the bag slightly ruptured from post/handling which has allowed the beans to breath for a few days before I started brewing it. Classic Ethiopian berry profile. Top fruity notch.